Here it is RoofFam, THE FIRST EXTENSIVE LOOK AT "ROOFLESS" LEAKED TO THE PUBLIC. Close your eyes and enter the world of the "Roofless!"

This 15-min mash up includes audio from our rough demos that we've produced during the development process, from workshop recording sessions, and dialog from table readings (which explains the page-turning noises….hahaha.) Much of the vocal work on the 20 songs in the show has been recorded by us, the composers (Tim Long and Jerome Johnson, aka LoJoWerkz) as is the normal case for musicals in development. Occasionally we've had very talented performers step in to help us on some of the demos. You'll hear much of their work here. Names of performers, as well as scene/song names appear on-screen.


PARENTAL ADVISORY - EXPLICIT LANGUAGE (One feature of "Roofless" that has been praised by critics is the "frank, unapologetic and realistic flavor" of the street vernacular.)


This demo touches on only about 1/8 of the material in the show, but hopefully represents the "Roofless" flavor fully. Again… our main reason for releasing this development material is to help raise awareness of the show as part of our fundraising attempts for our upcoming LA trip where we'll take many of the performers heard here with us to perform the entire show for our mentor Stephen Schwartz, Michael Kerker of ASCAP and several other Industry folks who will critique the show & offer us their advice. So PLEASE, if you like what you hear and want to help us move the show to the next step, DONATE to our support drive. ANY AMOUNT IS GREATLY NEEDED AND EVEN MORE GREATLY APPRECIATED!!


gofundme.com/RooflessThaMusical
Thanks,
Tim and Jerome
LoJoWerkz
Credits:
BIG SHOUT OUT to Bryant Lamar and 4U Media Group for recording the Avionce Hoyles sessions, and Tim Kennard and Quinton Davis, Forrest Productions for some amazing recording sessions in 05, some of which have remained as part of the score.
The following performers can be heard on these demos (credited, by scene in the demo) - they have almost all offered their considerable skills without payment as we've been on this journey and our thanks to them is immeasurable and eternal! (Listed Alphabetically): Fredrick Custard, Keith Da Sneak Daniels, Desmond Dansby, Kelley Childers Friedberg, Michael Fruga, Khalid Freeman, Earl Burns, Evangeline Smith, Misha Howell, Avionce Hoyles, Branjae Jackson, Bryant Lamar, Jillian Marie, Amanda Martindale, Adam Matta, Sterling Matthews, Andresia Moseley, AnnaMaria Pasley-Horn, Lawrence Rosenborough, Gabriel Royal, Taylar Smallwood, Nita Chandler Smothers, Kathryn Stefanic, Rosa Thomas, and Dionne White. (Composers Jerome Johnson and Tim Long also appear extensively.)
Posted by ROOFLESS at 8:28 PM No comments: 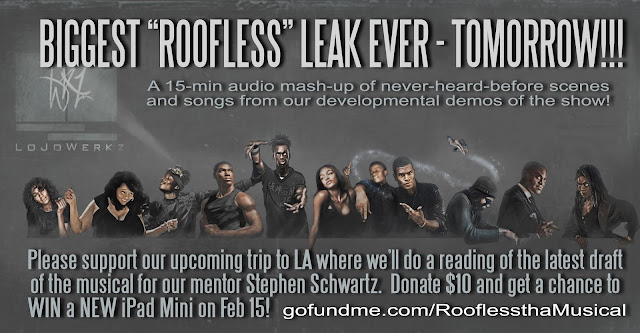 Posted by ROOFLESS at 4:41 PM No comments:

HEADED TO LA for a reading with STEPHEN SCHWARTZ! SUPPORT NEEDED! 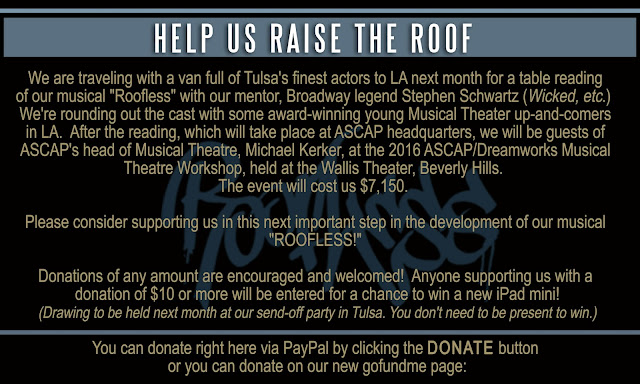 Posted by ROOFLESS at 8:49 AM No comments: