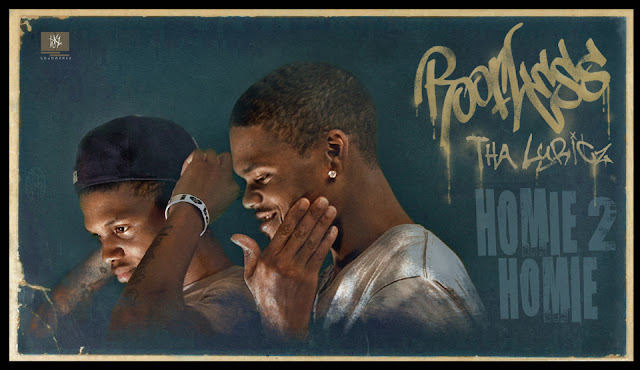 ROOFLESS - THA LYRICz
Sometimes its tough to figure out what to post while we're in development.  The script and score are constantly improving & evolving and in musical theatre its generally not common to do professional recordings that are "ready for public distribution" until AFTER a show fully funded, produced and well into a commercially successful run.  But in this day and age, when building an audience base depends on constant social network posting, its def a bit of a problem.   So while you guys are waiting for us to come up with some demos and vids, we thought why not start a little series that highlights some of the lyrics. This whole idea came about because of a lyric stuck in my head the past few days, so that's where we'll start.

HOMIE 2 HOMIE
Grammy nominated emcee Johnny Polygon was an original "Roofless" cast member, performing with us in Tulsa, Dallas, the L.A. Disney Workshop & the first ASCAP table reading.  Although Jerome & I are the composers & lyricists of the score, we were lucky to collab with JP on several numbers in the original show, along with Body Percussionist/emcee David "Sho'Tyme" Holmes.   All but one of those 3 original numbers have been cut or rewritten numerous times, but Johnny was cool enough to contribute a handful of new lyrics for one of the later rewrites. Those lyrics still remain in the song "Homie 2 Homie" to this day. We have to keep most of the new material close-to-the-vest as we're labbin the show, but we TRY to give little tastes of the show from time to time.  I've had this lil 8-line flow Johnny wrote for "H2H" stuck in my head all week so I thought we'd share em with ya'll.

So check out JP's pen game as principal character SCOPE tries to convince his homie MARQUEE to help him compose a lyrical wedding proposal for his girl Sela. When Scope begins stating the obvious; that he's in love with Sela, Marquee (who's not feelin his decision to take on a wifey right now) responds with this bit of cynical sarcasm: 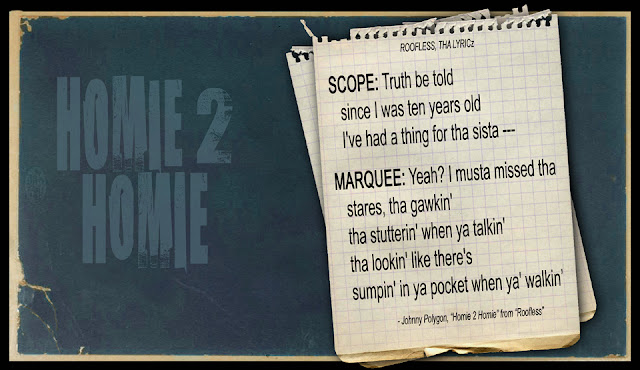 We'll try to post more lyrics as time permits & maybe some audio as we continue workin on the new demos.