Tha Lyricz - "Where Would You Go?" Deleted Lyrics 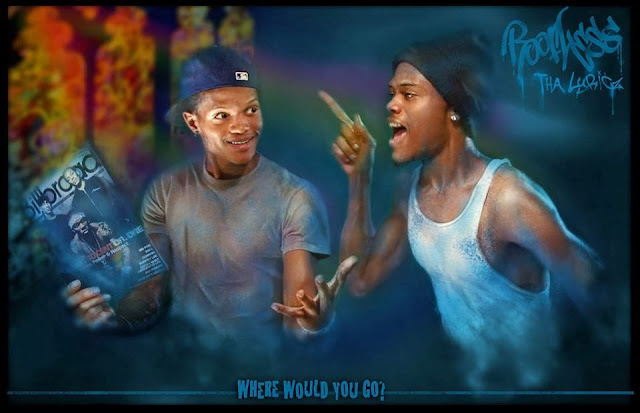 
One of my personal favorite numbers in our musical Roofless is a gospel parody that extols the sanctity of the proverbial record deal - that major label Holy Grail that fires the imagination of the Roofheadz, despite the fact that they know its a cliched pipe dream. When principle character Sela tries to get the others to face reality and consider their future plans if there is no record deal, Scope, Marquee and the other roofheadz hold fast to their faith.

The song is a game of shifting loyalties between Scope's unrealistic optimism and Sela's reality checks, with the Roofheadz playing both sides of the aisle, so to speak. They crack wise, freely mixing Religious and Music Industry metaphors throughout the song.

The number was running a little long so we had to cut a section. The section that was sacrificed was a section we wrote as an homage to a song by the great Yip Harburg from the musical Finian's Rainbow. In this section Scope and Marquee attempt to evangelize Sela to the ways of the Industry hook-up. Another reason we cut this section is because we knew the references would become more vague as the artists fell from the spotlight. Anyway, here's the resurrected lyrics:

It's the summer of 2005. On the Rooftop.
Scope and Marquee have grabbed the Industry bible (Billboard Magazine) and begin preaching to Sela.

ROOFHEADZ
AN' MO' PAPER ROLLED IN

SCOPE
NOT EVEN TONY WAS FORGOT

LOOMIN'
HE GOT BEGOT IN THA PEN

ROOFHEADZ
OUR BEGATS WILL BEGIN!

ROOFHEADZ
AND WE'LL BEGAT IN - BEGAT IN!