So I'm not sure what's crazier, the phrase "Thxy Roofsgiving" or undertaking the overly-self-important task of tracing "Roofless" back to its roots. Hahaha. But hey, its done in an effort to thank everyone involved in the growth of this project.  (If you were involved and we inadvertently omitted you, Please hit us up and we’ll getchur shine right!).
So here we go:

XSEED, 1997-1999
1997. After working for 4 years as part of  Greenwood Cultural Center and Higher Dimensions teaching/Fine Arts staff, we started work on our first full book musical, “A Song of Greenwood,”  and at the same time started a Hip-hop group called XSEED. We wrote and performed original material; live rap and vocals with full choreography.  2 of the numbers we wrote for XSEED had a life beyond the group.

The songs “Misfortunate” and “Wade” were first written for XSEED and demoed, but never performed.  Original versions were produced by Tim Long & David Holmes. Lyrics by Jerome, David Holmes and Jeremy Griffin.

JUMP IN THE WATER, 1999 - 2002
2 years later in 1999, our initial  public introduction of “Roofless” was a CD project & 30 min stage performance we called “Jump in the Water” based on the lyrics of “WADE” one of the overarching concepts of the project  (realizing that strength is found in facing your fears… the waters are troubled, but there’s purpose in the water...so jump in and get yours.) You can also hear us trying to develop our own unique musical language: part rap, part chant, part vocals... strong on rhythmic counterpoint & melodies somewhere between early African-American spiritual and work song and current R&B trends of late 90's. Body Percussion was added in the live version of Wade...and the "Roofless" musical voice really began to gel.

The project brought together some great Tulsa talent, many of whom joined the initial “Roofless” cast 2 years later.

Take a listen to our original version of “WADE”

Major supporters to the project: The National Endowment for the Arts through the Oklahoma Arts Council, Kim Johnson at the African-American Resource Center at Rudisill Regional Library, Bishop Gary McIntosh and the Greenwood Christian Center.

Big thanks to Chris Freihofer & Terry Martin at Dallas WaterTower Theatre for a major booking that led to the Dallas “Roofless” booking the following year.


The "JUMP IN THE WATER" CD project included a 10-min spoken word original story we wrote for the project.  Nationally recognized Storyteller Tyrone Wilkerson lent his skills as narrator.  The piece remains a powerful example of his gifts. 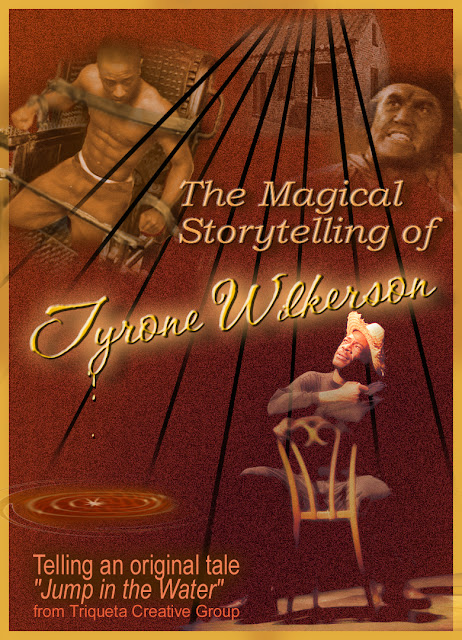 R.I.P. Byron Davis and Tryone Wilkerson. You are sorely missed our brothers.