The Saga continues ...
In 1998, after our well-received, well-reviewed  musical “A Song of Greenwood,” was staged at Greenwood Cultural Center,  we were given the opportunity to pitch a project to the movers and shakers at the Tulsa City-County Health Department. (who distributed grants for arts projects  that dealt with community issues.) They had been impressed by our artistic output and our on-going work with At-Risk youth in North Tulsa.   We pitched an idea for a show that followed a group of Hip-hop culture teenagers who sought refuge on the top of a highrise building.  The climax of the story featured a catastrophic flood the buried the downtown of the city and stranded them on the rooftop, forcing the antagonist adults to seek refuge in the sanctuary of these kids.  Our research led us to New Orleans as the setting.

Our vision was much bigger than the type of project TCCH Dept was looking for at the time. And, believe it or not, the idea of a flood of such Biblical proportions was a little hard to swallow.    ….Katrina hit New Orleans 7 years later.

Many of the concepts of that original idea remain in the show till today, including the dark, stormy atmosphere of the world of Roofless.  The only tangible thing that remains from that pitch is this first concept logo sketch:

ROOFLESS WORLD PREMIERE, AUG 24 – 27, 2002
A Big ROOFSGIVING Shoutout to the brave souls who, in 2001, took a chance on the idea of a musical theatre project that would combine Rap, R&B. Musical Theatre Song, Salsa, Ragtime, Slavery-Era Spirituals, Ring Shout, Pattin’ Juba (Body Percussion), House,  etc. … and it will explore the rising rate of suicide among African-American teenagers.      Remember, this is 2001…when Musicals were still very much out-of-vogue.  As usual, we had LOTS of people telling us this was a bad idea. Lol.  But a big thank you to those who supported us & jumped in the water with us!

A lil history:
1999 - Childhood friend Chris Freihofer, who had now become one the top theatrical directors and casting agents in the region was the next one to hear the pitch of “Roofless.”  Chris had been very instrumental in our “A Song of Greenwood” period, both as a dramaturge and Directorial advisor and “politically” in introducing us to Kay Armstrong at the Oklahoma Community Theatre Association (who taught us how to write successful grant proposals)  To be completely honest, I don’t remember much about that meeting and what was said on either side of the table, lol.  As with many works at their inception I think it seemed like an idea with some potential. He suggested we go for it.   Chris’s influence extended further once the show was on its feet.  He not only made a trip to Tulsa to help us pitch “Roofless” to TPACT* (see below), he also recommended our “Jump in the Water” preview performance to Terry Wright at The WaterTower Theatre in Dallas for the launch of their “Out of the Loop” festival. (The preview got a rave review in the Dallas Morning News and we were invited to bring the full show to Dallas to headline the 2003 Festival.)

BIG shoutout to the *TULSA PERFORMING ARTS CENTER TRUST who took a chance on 2 young, fairly unknown playwrights and their hair-brained idea for a musical.  When they offered us a facility grant, it enabled us to stage our world-premiere of “Roofless” at Tulsa’s most elite theatrical venue. Other nods of approval from the NATIONAL ENDOWMENT FOR THE ARTS through the OKLAHOMA ARTS COUNCIL, The OKLAHOMA COMMUNITY THEATRE ASSOCIATION, The ARTS AND HUMANITIES COUNCIL of TULSA soon followed.  Additional support came from :
WALMART  FOUNDATION
GREENWOOD CHRISTIAN CENTER
YOUTH SERVICES of TULSA
Z PRODUCTIONS
The TECHNICAL INSTITUTE of COSMETOLOGY ARTS & SCIENCES of Tulsa
JEFF & SHEILA BRADFORD
JOHN & JACQUELINE STARKS
MONA LONG
BRIAN & HOLLY HARPSTER
KAY ARMSTRONG
CHRIS FREIHOFER 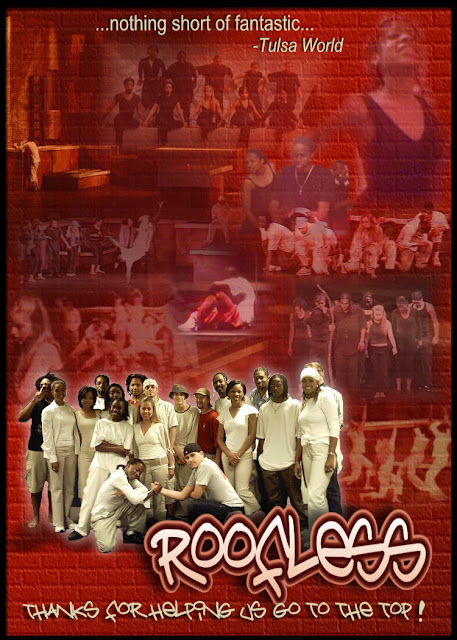 THE MOMENTUM CONTINUES...
Tulsa theatrical legend Tyrone Wilkerson, a long-time supporter and cheerleader for our work, played a BIG role in the next step on our journey.   The premiere of Roofless was booked for only 4 performances.  The Tulsa World normally doesn’t review one-weekend shows but after Tyrone saw the opening night performance he got on the phone and convinced The Tulsa World that this was a phenomenal show that deserved a full review.  They sent Entertainment writer Michael Smith and his review was glowing.
When it came time for Tyrone to select the show he wanted to direct in his yearly directorial slot with American Theatre Company, again, he went to bat and fought for our unusual show.  ATC agreed and our second staging took place in early 2003, an 8-performance run that garnered more rave reviews.   A few weeks after the ATC run we took the show to Dallas to headline the WaterTower Theatre’s Out of the Loop Festival for 3 performances. Another hit!  We had yet to perform amy version of  “Roofless” without receiving a standing ovation.

Later in the year, The Tulsa World selected “Roofless” as one of the best stage performances of the year. 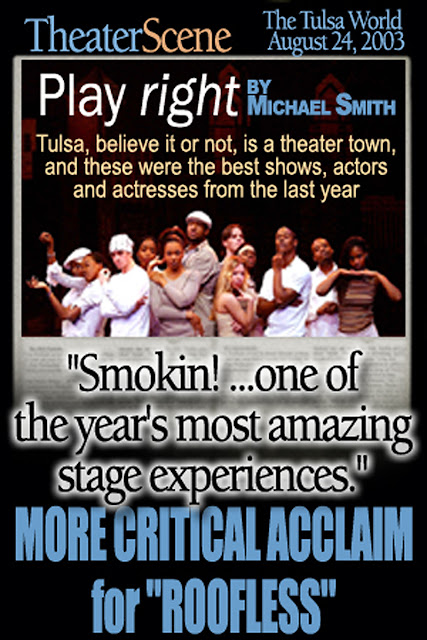